Hey! Well…to be honest I was a little surprised to not see a family weekly email. That is alright actually. That might help keep this one a little bit shorter. This week was a lot of fun. I enjoyed it a lot and the stories I have are good. Well…I like them. 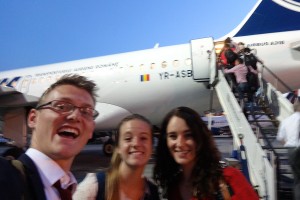 This week we had MLC. Which is awesome, except that fact that we live so far away. So, on thursday we had our exchange in Cluj. (I tried really hard to find Stroia Ballet, but time did not permit me to find it.) We had an awesome time in Cluj, and that night we even had a water balloon fight, which ended up being me dumping large amounts of water on everyone. It was a lot of fun and we all got soaked! Cluj is a beautiful city. I loved being there a lot. I took some pictures but not enough. I think that I will get to see it again though, so I am not to worried. 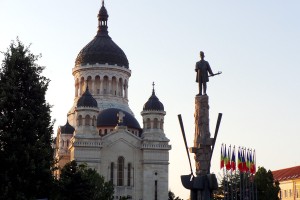 After that we were able to go to Bucharest for MLC. We got up at 4 a.m. that morning to catch our flight and we flew to bucharest. It was crazy to fly. I felt really weird. I thought “wait, this isn’t supposed to be happening for another four months!”. It was cool though too. I enjoy flying a lot. It went by really fast. So we then had MLC. It was a wonderful meeting and I felt really good walking out of it. (funny side story. So one of the AP’s is a national champion for basketball. or something like that…we decided that another Elder was going to “dunk” on him…meaning jump over him a little bit to slam dunk a ball…so we made a few phone calls and five minutes before MLC started, I reached into a bag and pulled out a hang on the door basketball hoop above the AP and behind him…Then the other Elder came out of nowhere and dunked on him! It was so awesome and funny! Then twenty seconds later president walked in the door. Perfect timing. 😉 ).

I loved MLC, and then we took a plane home. The flight was only 45 minutes so that wasn’t bad. We landed in Cluj at around 11 o’clock. We slep till 1 a.m. to catch our 2 a.m. train back to Oradea. We had set up a really important soccer game at 8 a.m. with a member in the branch here. It was big because he doesn’t set up meetings to play or talk to any missionaries. We made it a priority and so there we were at 2 a.m. on a train. We got back to Oradea at 5, slept till 7. Called to confirm, and he cancelled on us…ugh…so we slept in till 10. Maybe not the best hing to do, but we were so exhausted from everything that week. It was needed. It was a lot of fun.

That is really all I can think about for this week. It has been super hot, and humid. Oh yeah, we also played soccer in the rain with some kids this week. That was fun. I scraped up my knee real bad though. Then I poured carbonated water on it by accident. That was fun. I enjoyed that a Lot. I love playing soccer, even if I am bad at it. I think we are going to try and play again, but my companion will need some new shoes.

I can’t really think of anything else. We try to stay healthy, have fun, and teach people about the Gospel. We have had a fun week and we look forward to this week a lot too! I hope to have more stories next week!